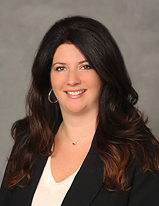 Tracey initially joined Tekmark as a technical recruiter in 1995 where she blossomed into one of the company’s top producers. In this role, Ms. DelGrande began training all new recruiting staff members and took on additional management responsibilities.  Before being named to her current role, Tracey held the executive position of vice president of operations. Prior to that, she held the executive position of vice president of staffing, where she was responsible for the staffing division's day-to-day management and fulfillment process. As Tekmark's VP Staffing, she initiated a number of programs to improve the automation and process for Tekmark's operation, and continues to contribute to the steady growth of Tekmark's revenue. As one of the pioneer’s of Tekmark’s training program, Ms. DelGrande maintains her involvement in the expansion of the recruiting and sales teams.

Before joining Tekmark, Ms. Del Grande had many successes working for a NY-based promotional company handling business-to-business and residential sales channels. Ms. Del Grande graduated from the State University of New York with a degree in marketing.

Thank you for sharing your experience!

We have received your request

We will be in touch within 24 hours.